Volume One: A Matter of Temperance 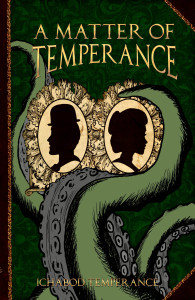 “Hello, is anyone there?”
“This is Ichabod Temperance, transmitting from the year 1875.”
“Do you read me?”
“Oh my Goodness! We’ve got trouble, y’all!”
“Ever since that strange comet passed our world, not only have there been more than just an overwhelming amount of steam and spring inventions popping up all over Earth, but there also have been uncanny monster sightings as well! Well, almost sightings, as these inter-dimensional, over-legged, eyeball-clustered beasties are nearly invisible to the human eye! That is where my own enhanced inventiveness has gotten me into misadventure as I alone have created a device that allows me to see the hippo-sized craw-daddies.”
“Maybe Fate had a hand in my goggle development, for it led to my meeting the most beautiful girl in the world in this year of 1875. Now it’s up to me and Miss Plumtartt to save our planet from being gobbled up gone!”

In 1869, the Earth experiences the close pass of a new comet. In its wake, thousands of Terra’s inhabitants find themselves strangely changed. Among humanity, many find that any talent they may naturally possess has been elevated to an astounding degree. Likewise, a number of animals become self-aware and intelligent. A young “comet prodigy” from humble beginnings, Ichabod Temperance, has become one of the world’s foremost inventors in this age of prolific genius. Traveling to England to deliver his latest brilliant device to a famous explorer, the young tinker is unexpectedly struck by the fearsome hand of fate. Meanwhile, a lovely young aristocrat, Miss Persephone Plumtartt, survives an experimental accident only to find herself imbued with a power she can neither understand nor control, while dark forces and malevolent creatures pursue her, leaving a gruesome wake of death.
Yet, worse is to come. The naïve young inventor and the lovely intellectual find themselves fighting not only to save their own lives, while concurrently coming to terms with their own budding romance, but to prevent the destruction of all life on Earth in this humorously told and poignant steampunk adventure!

A Matter of Temperance on Amazon.com for only $0.99!

Volume Two: A World of InTemperance 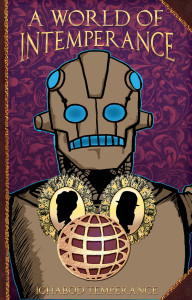 “I say, Mr. Temperance, you would do well, sir, to be more aware of the world around you. The clamour of war threatens to engulf the globe. Moreover, I confess a trepidation in my soul stemming from other quarters in this galloping age of invention. I feel certain that we are at risk from threats of a supernatural origin. Do you not agree, eh hem?”
“Yes, Ma’am, Miss Plumtartt, Ma’am, I have the same sense of nameless dread gripping my pumper in its icy grip. Why, it looks as if you and I have uncovered a conspiracy to plunge all the world’s countries into mayhem and disaster, leaving the spoils of a conquered planet to the tender mercies of heartless tyrants using means inhuman to gain their sway. I’m glad we have the companionship of a telepathic doggie, a tin-man, and all sorts of other entertaining folks to see us through this peril, for I think we might be in a lot of trouble!”

It is New Year’s Eve, 1875. In this humorously told Steampunk tale, adventure-prone Ichabod Temperance and his lovely sweetheart, Miss Persephone Plumtartt, once again find themselves swept up into a whirlwind of misadventure and international catastrophe. The entire world totters on the brink of war, as various nations develop arsenals of dreadful power. It seems as though every nation on Earth lusts for Empire. A sinister plot boils to change the course of human history. Along with a remarkable cast of characters, including sapient animals and clockwork men, our heroes find themselves plunged into unimaginable peril!

A World of Intemperance available at Amazon.com for only $0.99!

Volume Three: For the Love of Temperance 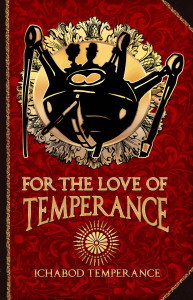 “Golly, Miss Plumtartt, the Earth is getting pummeled with meteorites!”
“I say, if only these projectiles were organically based, Mr. Temperance, I would not be of such a troubled mind, but I fear that the flaming flotsam are revealing themselves to be warcraft from the planet Mars. Their weapons are uncanny and easily defeat the greatest of Terra’s resources. These invaders wish to strip our beloved planet of her native sovereignty!”
“Holy Red Planet Invaders, Miss Plumtartt, you’re right! I reckon it’s gonna be up to you, me, and this charming cast of characters to save the Earth in this War betwixt the Worlds.”

The sovereignty of Planet Earth is under assault by interplanetary invaders. Ichabod Temperance and Persephone Plumtartt return in this thrilling Steampunk adventure. The duo fight bloodthirsty monsters bent on Earth’s conquest. Featuring a cast of unforgettable characters, including the world’s greatest actor and a telepathic dog, For the Love of Temperance will scare you and amuse you by turns.
For the Love of Temperance Available at Amazon for only $0.99

Volume Four: A Study in Temperance 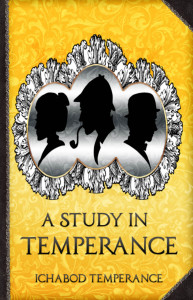 “Gee, Miss Plumtartt, after our calamitous arrival on this unsuspecting city, do you think we are still under threat of imminent murder by gangs of assorted, yet stylish, assassins?”
“I say, I do fear this to be the case, Mr. Temperance. The machinations of intrigue are not unlike one of your ingenious spring-driven contraptions, sir. Yes, plots boil and swarms of suspicious characters are at our every turn, eh hem?”
“Yes, Ma’am, Miss Plumtartt, Ma’am. It’s a good thing we have enlisted the assistance of this notorious, Victorian-era London detective to assist us in this baffling murder mystery adventure, for I fear there is more to this tale than meets the eye!”

” ‘Twas the hand of fate that brought Miss Plumtartt and me together, for, in truth, we have been happenstance-stricken and adventure prone ever since.” -Ichabod Temperance, For the Love of Temperance

Such is the case once again as Ichabod Temperance and his lady love, Miss Persephone Plumtartt, are hurled into adventure and mystery. This time, they return to Persephone’s ancestral estate in England, where they hope to enjoy a much-needed vacation. However, fate has other plans for the young couple, as a series of murders close in upon the innocent pair. A notorious Victorian Era London detective assists the plucky protagonists through a tangled web of intrigue involving an incredible cast of suspicious characters.

A Study in Temperance available at Amazon for only $0.99

Volume Five: In a Latitude of Temperance 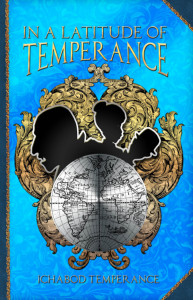 “Gee, whiz, Miss Plumtartt, these here are sure enough an odd assortment of characters you and I have run up with.”
“Indeed, Mr. Temperance, and at the risk of disclosing any ‘spoilers’ for our dear readers, I suspect that we have allowed ourselves to fall into the clutches of a Nosferatu brood.”
“Nosfer-who-who?”
“Nosferatu, Mr. Temperance, undead fiends that gain sustenance by slaking their unnatural thirsts on the manna of the living.”
“Oh my Goodness! You mean we are prisoners of a bunch of bloodsucking Vampyres? That’s terrible!”
“Quite, but what is even more troubling, is my suspicion that they are brewing a conspiracy that could threaten life at every level all over planet Earth!”
“Golly!”

In a Latitude of Temperance at Amazon for only $0.99

Volume Six: The Measure of Temperance 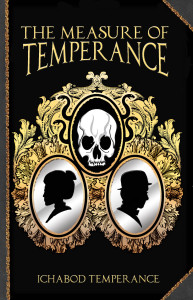 “…Moan…”
“Are you well, Mr. Temperance?”
“Hunh? Oh, yes, Ma’am, Miss Plumtartt, Ma’am, it’s just that since we find ourselves stranded on this voodoo-drenched Carribean island, I thought it might be a good idea to practice acting like a mobile corpse, cause it’s looking like we are up to our armpits in dead folks walking. My suspicion is that they’re wanting to snack on our gray matter.”
“Indeed, Mr. Temperance, for I fear that if you, I, and our compatriots are not successful on this escapade, the entire planet could be threatened by cadaver cataclysm, eh hem?”
“Yes, Ma’am, Miss Plumtartt, Ma’am, and don’t let the singing and dancing fool you. This here adventure is full of scary circumstances, Ma’am, and that’s a fact!”

The Measure of Temperance at Amazon for only $0.99

“Leapin’ lizards, Miss Plumtartt, we’ve got big trouble, really big trouble!”
“Indeed, Mr. Temperance, for unethical experiments carried out in this remote locale, somewhere south of Nippon, has left this Monstrous Isle aswarm with uncanny creatures of titanic dimensions, eh hem?”
“Yes, Ma’am, Miss Plumtartt, Ma’am, and if we ain’t careful, one extra jumbo-sized mega-reptile is going to run rampant all over our unsuspecting planet!”
“Then let us gather what comrades we may, however unlikely they be, and face this, the greatest of your challenges: Ichabod Temperance versus the Monarch of all Monsters!”

The Seventh Voyage of Temperance at Amazon for only $0.99!

Volume Eight: The Title of Temperance 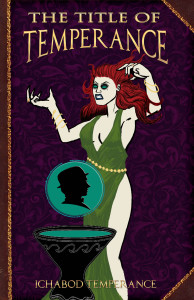 Ohhh, my noggin. What has happened? I took a whallop upside the head and woke up in a place far from my time and home. Instead of it being the modern era of 1877 like it ought to be, I am in the distant past of England’s Dark Ages! There are mighty warriors in gleaming armour, and beautiful ladies wearing colourful gowns with taffeta secured dunce caps.

This is the castle Camelot! I am in the company of King Arthur and his majestic Knights!

Golly, can you imagine? Me, Ichabod Temperance, an Alabama tinker in King Arthur’s Camelot!

Oh, Goodness, it ain’t took too long before I already have trouble up to my hat’s brim what with Mr. Merlin, Miss Morgana, and a big mean knight in black armour getting bristly with me. Gee whiz, if I ain’t careful, I might end up wrecking there ever having been a Western Civilization!

The Title of Temperance at Amazon for Kindle for only $0.99!

Volume Nine: A Journey of Temperance 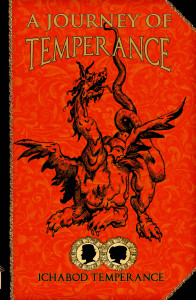 “I say, this fantastic craft you have built has transported us to a new world, Mr. Temperance, eh hem?”

“Yes, Ma’am, Miss Plumtartt, Ma’am! Gosh, we find ourselves among many mythological beasts of outrageous legend. It would take three of me to make just one of the dwarves that live around here.”

“Yes, quite, and I find that there is no shortage of troll, gremlin, or magical creature to assail us in our destined quest.”

“You sure are right about that, Ma’am. In fact, I think we have gotten embroiled in a sweeping, high fantasy saga of epic proportions!”

Buy A Journey of Temperance for Kindle at Amazon for only $0.99! 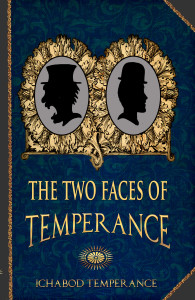 “Oh, my Goodness, Miss Plumtartt, there is a fiendish monster at loose in London!”

“Quite so, Mr. Temperance. I say, the villain has the Great City in an uproar, sir.”

“Yes, Ma’am, Miss Plumtartt, Ma’am, there is murder at our elbow, wherever we turn.”

“The machinations of intrigue threaten to crush us in their merciless gears, eh hem? Yes, One suspects that this adventure may come to be known as ‘The Strange Case of Dr. Icky and Mr. Temperance.”

* A Request by the Author:
Dear Reader, if, perchance, you should come across some drunken rogues in song whilst reading this book, you are strongly encouraged to sing these passages aloud.
Your cooperation in this matter is sincerely appreciated.
~Icky.

The Two Faces of Temperance for Kindle only $0.99 at Amazon!